This PVCS-2-TFS tool imports the PVCS archive as a flat file list with the complete history and all branched-versions and labels.

PVCS and TFS are two different systems. TFS is based on changesets and PVCS is based on labels and branches. But TFS also supports labels. This tool now imports PVCS databases into TFS and preserves the labels. It also imports all files (including all branched files) in a flat changeset hierarchy. And because these labels are imported you can access all files with the specified labels as in PVCS. Also you can additionally access all files by selecting a changest.

If you are interessted in this product, then please request a trial version.

VS2010 and newer TFS versions

If your PVCS version is too low, you need to use XP and therefor also VS2010 (because this is the last VS which is supported under XP). But you still can connect to a newer version of TFS.
On your XP client computer, you need VS2010 SP1 and the Compat GDR.
For more infos see: Compatibility between Team Foundation clients and Team Foundation Server.

The import tool has a simple user-interface: 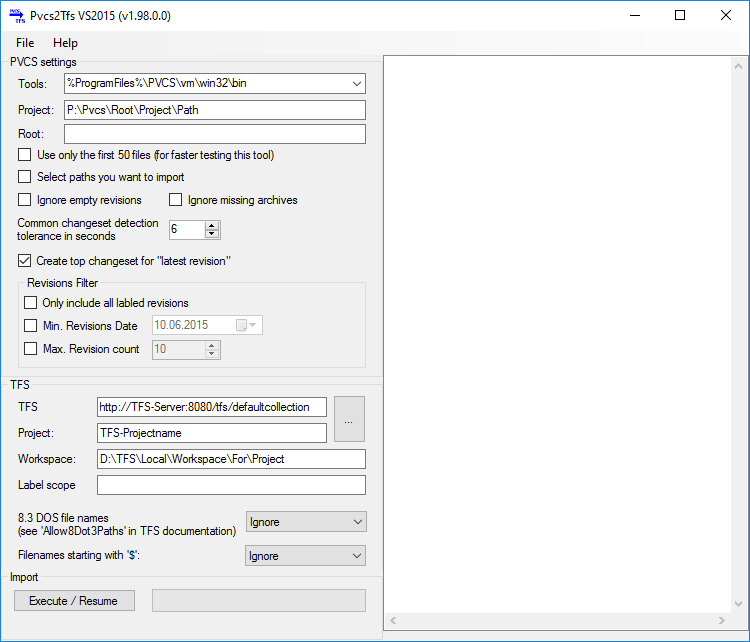 You can save and load your settings. So there is no need to input the data several times.

Here you need to specify the location of the PVCS tools direcory. You can use the drop-down list to select on of the following directories. if you start the tool, it will preselect either the version which was found, or the first entry.

The path with “%ProgramFiles%” works for x86 and x64 systems…

This is the path to your PVCS project. It must be the same as you would provide in the PVCS “Open database…” selection.
It might contain an UNC name or drive letter.
The project path can be found in the PVCS UI: 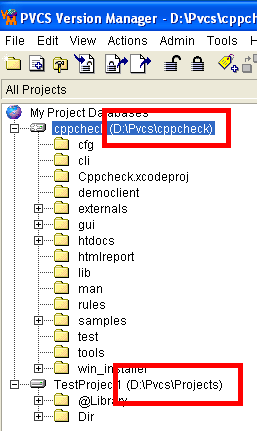 If you have a large project (about > 50.000 files), it is always recommended to migrate the PVCS project in smaller parts. For this you use normally the “Select paths you want to import” (see below). This has the only disadvantage, that the list of all files must be fetched before the selection process can be shown. If your project is really large (about > 200.000 files) this first step can take several minutes or an hour.
In this situation, you can manually enter the PVCS directory your want to import. The directory must be in the form “/PVCS-Dir/PVCS-SubDir/(and so on)”. Then only this directory is fetched and imported.
For normal projects, you should leave this empty.

If you just want to test the migration without importing all files, you can check this checkbox.
Also the demo version limits the number of files to about 50.

If you want to select specific folders of the PVCS porject and do not want to import the whole project,
you can check this box and after you have started the import and the PVCS files are retrived,
you can select which top-level folders you want to import.

Some PVCS archives have files which have no revisions. These files cannot be imported into the TFS, because there is no data available for import. Normally this is a error in the PVCS project and we report an error. If you want to ignore files with empty revisions, you can check this checkbox and then we will just report a warning for each file.

Some PVCS files have no archives. In this case, the import would stop, because the file could not be retrived. If you check this option, these files get ignored and it will just display a warning, but the import will continue. A missing archive will be detected by the following error messages from PVCS:

Normally this should be activated. It ensures that the last PVCS revision is also inside the latest TFS changeset. So if you do a “get latest” you will automatically get the latest revision from all of your PVCS files.
If this is checked, then the label “__PvcsImportLatest__” (see below) will not generated, because the last changeset is exactly the latest PVCS revision.

If you want to import all revisions, you must not check any of these filter options!

Only include all labeld revisions

If you check this option, then at least all labeld revisions will be included in the import.

This is the URL name of the TFS server. Normally this looks like:

This is only the project name of the TFS project on which you want to import the PVCS database.
Normally it looks like:

This is the mapped location of a TFS directoy in which you want to import the PVCS project.
Normally it looks like:

Normally you should leave this empty. If you want to import several separate PVCS porjects which contains the same labels, then you need to use this field. For more infos see below.

Short 8.3 filenames (like DOCUME~1.TXT) cannot be imported by default into TFS. Here you can select what should happen with 8.3 file names:

If you want to allow 8.3 files, then please be sure you have configured your TFS server correctly!.

File names starting with a dollar sign ($) are not supported by TFS server.
Here you can select what should happen with 8.3 file names:

Result of the import

Of course, the “(PVCSUserName)” and “(PVCSCheckInData: yyy-MM-dd HH:mm:ss)” will be replaced in the none-demo version with the correct fields from PVCS.

Resuming of the import

If for whatever reason there is a problem with the TFS server and an exception occurs,
you can resume the import by just doing the import again. It will look in the “Data” subsdirectory if the import has already started and continues on the next changeset.

Because of this resuming feature, you need to delete the Data subdirectory in order to import a different project!
In this Data directory all the information of a previous started import is saved. If you changes the PVCS project, you need to manually delete the directory!

Working with the imported files

To get the latest version of the files (PVCS: 1.*), you need to get the special auto.generated label “__PvcsImportLatest__”.
This is because the lasted changeset needs not to be a change in the main-branch, but this can also be a change in one of the PVCS branches. So therefor the label “__PvcsImportLatest__” is generated for all real latest files.

Here is a very short description on how the tools does the import:

The import is done in 4 steps:

Generation of the changesets

In PVCS there is no information like a “changeset”. In TFS you can checkin several files within a changeset. In order to mimic the TFS way, the changesets are generated by using “similar PVCS checkins”. Similar means, that the username and the comment must be the same. Also the checkin date must almost be the same (by default about +/- 6 seconds; this can be modified in the setting “Common changset detection tolerance in seconds”). If this condition fits for several files, then these files will be checked in using the same TFS changeset.

If you have enabled security and you need to log in with a different user/password, then you need to provide this information in the environment variable “PCLI_ID”. You can either set this variable for the user (Control Panel|System|Environment) or open a command prompt, set the variable (SET PCLI_ID=”UserId:UserPassword”) and the start the Pvcs2Tfs program from this command prompt. For more informations about the “PCLI_ID” environment variable please see the “plci.pdf” documentation of your PVCS installation. On some PVCS installation you also need to enable the PCLI_ID environment variable by changing the file “Install_Dir\vm\common\pvcsprop\pvcs\vm\security.properties” and setting “vm.allowEventPassword=enabled”.

Importing of different PVCS archives with the same labels

If you also have several PVCS databases with same labels you can do it as follows. Each database must be imported on its own. But in TFS you later want to access the labels the imported projects. Because of this, you need to specify a label scope. By default, if you create a label in TFS it has only the scope of the directory (and below) where you assign the label. So for example you can have a dir “Path1” and “Path2” in a parent directory called “root”. You can assign the label “L1” to “Path1” and “L1” to “Path2”. But if you want to get the label “L1” from the parent directory “root”, it will be not found! That is because there are two label scopes. And the root directory does not have the same label scope. Therefor if you want to use a label across several imported PVCS databases, you need to specify the label-scope on a (parent) directory on which all projects have access to.
During the import the label “L1” will then be created on the first PVCS database-import; and on the second PVCS-import the label “L1” will be merged together with the existing “L1” label.
Therefor you can now access all imported files across the proejcts by accessing the label “L1” in the parent folder.

Currently there is no username-mapping implemented. The current TFS user will be used for all check-ins.

The Pvcs2tfs tool has the following command line options:

If you have any problems, please sent us the logfile “PvcsImportLog.txt” which is located in the directory of the application to “support add pvcs2tfs dot com”. We then get in contact with you within the next couple of days.